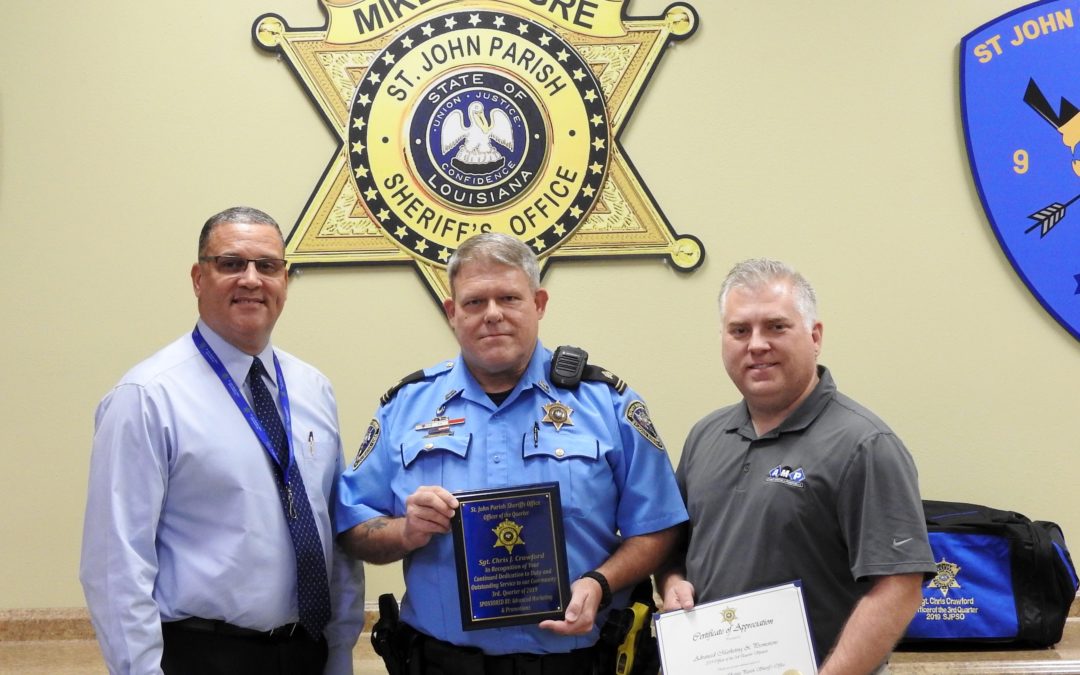 Sheriff Mike Tregre has named Sgt. Chris Crawford as Officer of the Third Quarter for 2019. He was recognized for his compassionate nature and professional manner in which he was able to talk a male subject out of committing suicide and surrendering to police after a pursuit on major expressways with a high volume of traffic.

On August 28, 2019, officers responded to a call of a male subject who left his home in a vehicle, threatening to kill himself. Shortly after, officers locateD the male who had stopped in a restaurant parking lot. As officers attempted to make contact with the male, he fled. After a pursuit on I-10 eastbound and then I-55 northbound, the subject stopped the vehicle on the overpass bridge in Manchac. Since it was reported that the male intended to kill himself, officers feared he would exit the vehicle and jump off the bridge. Also, since it was unknown if the driver was armed, officers closed the Interstate where multiple miles of traffic had started to back up. Officers gave several commands to the male to exit the vehicle, but he refused to comply. Shortly after, Sgt. Crawford arrived on scene and began speaking to the male through a patrol unit’s public address system. At first, the male continued to be uncooperative. Patiently and calmly, Sgt. Crawford continued to talk to the subject. Eventually, Sgt. Crawford convinced the male to exit the vehicle, and officers were able to take the male into custody without incident or harm to himself, the officers, or the people on the roadway.

“By speaking to the male in a personal manner, Sgt. Chris Crawford helped the situation end quickly and without further incident,” Captain Swancey said.

With Sgt. Crawford are Sheriff Mike Tregre and Wayne Vicknair, owner of Advanced Marketing and Promotions, sponsor of the Officer of the Third Quarter Award.