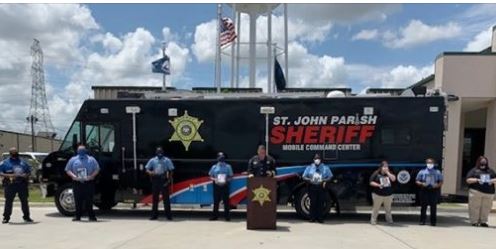 St. John Sheriff Mike Tregre led a memorial service and balloon release May 13, 2020 honoring the fallen heroes of the St. John Parish Sheriff’s Office as part of National Police Week, which pays tribute to officers killed in the line of duty and honors their memory.
“… There are no fancy words, rhymes, or quotes that can put more meaning into what our brothers in blue have done for us,” Sheriff Tregre said. “… We are here to remember and honor our officers who died under tragic circumstances. It is the courage and spirit of our fallen officers that allow us to carry on.”
St. John officers killed in the line of duty and End of Watch were Constable Ignace Rousselle, October 20, 1936; Deputy Harry Troxlair Sr.,August 1, 1969; Det. Sherman Walker, November 6, 1984; Deputy Barton Granier, January 27, 1996; Code Officer Edmond Songy Jr., July 9, 2002; Captain Octavio Gonzalez, June 16, 2006; and Deputy Brandon Nielsen and Deputy Jeremy Triche, August 16, 2012.