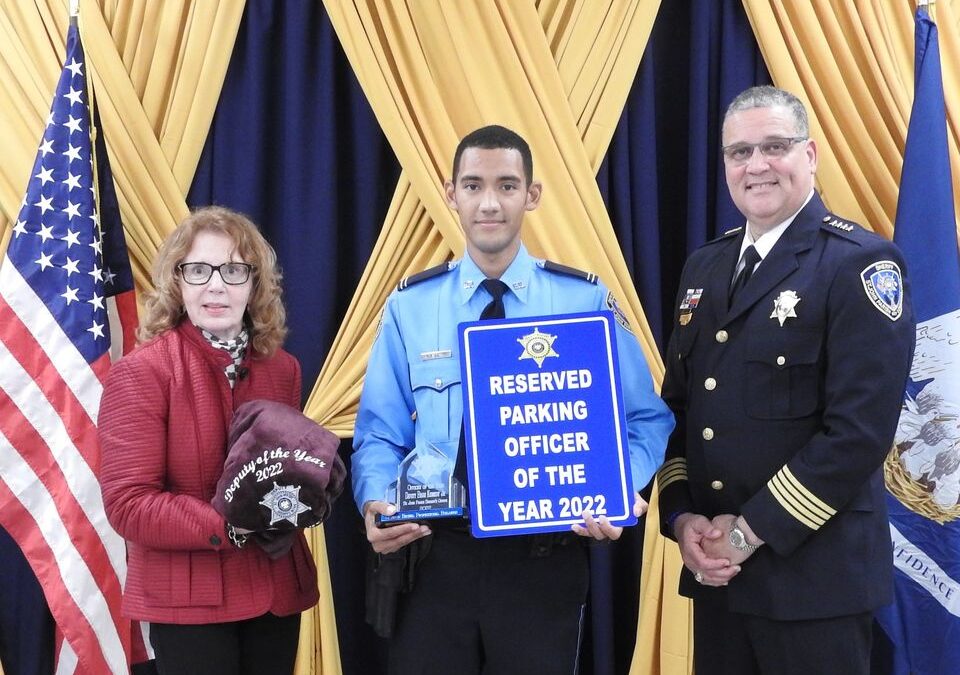 Deputy Kennedy, while off duty, played a major role in helping to save the life of a man who was experiencing medical distress while driving and crashed into a canal on Longwood Court in LaPlace. Deputy Kennedy administered CPR until emergency medical services arrived and transported the man to an area hospital where he was treated and later released. Deputy Kennedy also received a life saving award for his efforts during this incident.

Several officers and their family members and guests attended the program that honors the Officer of the Year as well as pays tribute to outstanding officers. These officers are recognized for their dedication to public service, outstanding commitment to the community, excellent police work, and the commendable manner in which they perform their jobs. Sheriff Tregre works with several local businesses that provide sponsorships and contributions to award these outstanding officers.

Other outstanding officers recognized as Officers of the Quarters were Captain Conrad Baker and Deputy Karanell Tassin.

Other special awards also were presented.

Captain Jake Boudreaux was honored with the Sheriff’s Star for exceptional police work, dedication, professionalism, loyalty and service to the community and the SJSO.

Captain Boudreaux and Sergeant Jonathan Walker received life saving awards. On July 12, 2022, these officers responded to a shooting in which a man was shot in the arm and chest. Capt. Boudreaux and Sgt. Walker applied a tourniquet to the right arm and a chest patch to stop the bleeding. Emergency medical services arrived transported the male victim to a New Orleans area hospital where he recovered.

Unit Commendation was awarded to the SWAT team, supervised by Captain Jake Boudreaux, for outstanding response, actions, teamwork and professionalism in the past year. Over the last 12 months, the team has been instrumental in the reduction of crime in St. John Parish. The team has removed about 70 guns from the streets of St. John with some of these guns having been used in violent crimes. This team also was essential in arresting several violent felony warrant wanted subjects, and did so without incident. This SWAT team is always available and is sometimes called out several times in a single day and handles whatever the need is, without issue, Sheriff Tregre said.

The SJSO also acknowledged businesses for generous support of law enforcement. Businesses recognized for sponsoring officers of the quarters were Harold and Toni Flynn of Flynn Land Design, Natalie Tatje of Tatje Insurance, Dustin Hinds of Enterprise Fleet Management Inc., and Alex Jones of The Flying Locksmiths and sponsor of the Officer of the Year, the Honorable Mary Becnel and Becnel Professional Buildings.

Merlyna Valentine, the keynote speaker, captivated the audience with her words of motivation and inspiration. Mrs. Valentine is an accomplished educator dedicated to developing dynamic leadership skills and enhancing employee effectiveness.

Sheriff Tregre said he is proud of all officers in the department for their great performance and dedication to St. John and the SJSO.

Training has been crucial in helping officers to enhance their job performance, Sheriff Tregre said.

“Since 2011, I have made it clear that high level training is important to me. We now have constant training for our officer in drug trafficking, illegal weapon seizure, cyber crimes, CPR, Stop the Bleed, first aid, and use of Narcan in the event of drug overdoses.”

Sheriff Tregre said he is excited about the advancement of the SJSO. “I see a lot of progress from my early days here,” he said. “We are hiring more officers and providing better benefits for them and their families. The state of the art Lloyd B. Johnson Law Enforcement Training Center is now complete and has already proven to be an asset to the community during Hurricane Ida.”

Officers are now better able to serve the west bank with the completion of the West Bank Public Safety Complex, he said. The Octavio Gonzales SWAT Training Center is completed and is being utilized to train officers from all over the United States.

Sheriff Tregre also thanked officers for their community work. Among the activities officers present for the community are the kids fishing camp, punt, pass, & kick event, Tots for Tots, the senior citizens meal delivery for Thanksgiving and Christmas, dressing up as Super Heroes and Santa Claus and the Grinch.

In conclusion, Sheriff Tregre told officers he is very grateful for their work.

“Thank you to the men and women of SJSO for a job well done,” he told the audience. “Ours is a profession that few people want to do and even fewer can do. You make a difference in our community and law enforcement as a whole. I am honored to lead this department.”