2014 Officer of the Year Awards Ceremony

Several St John Sheriff’s Officers were honored  with Lifesaving Awards at the Awards and Dinner ceremony for thier outstanding service to St John Parish.

Also recognized were the 2014 Officers of the Quarter

The entire Criminal Investigations Division received the Officer of the 1st Quarter.
Because of their continued dedication and commitment to keeping our Citizens safe, the Detectives in CID have worked tirelessly to identify and arrest the suspects in the homicide case at the LaPlace Feed Store and set a strong foundation for the New Orleans Police Department, and continue to work together to identify and arrest 3 suspects in the homicide cases of Kenneth and LaKeitha Joseph.  The Detectives continue to sacrifice time away from their families to bring justice to all victims of foul play. 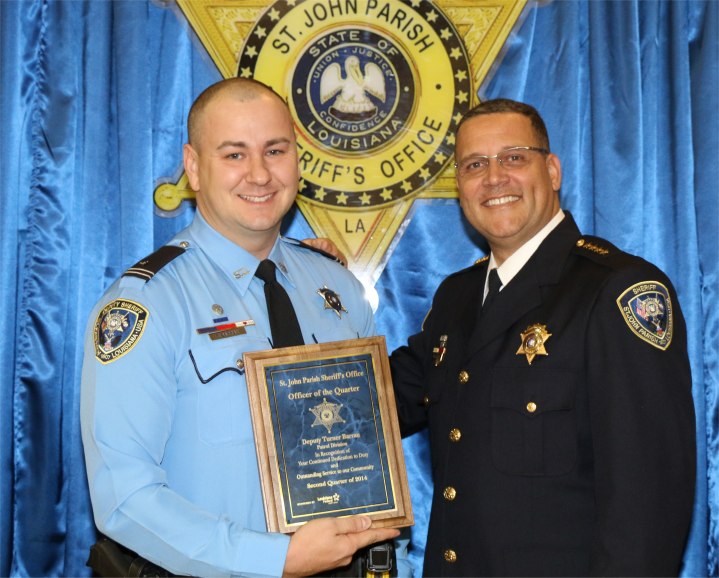 Deputy Turner Barron received the Officer of the 2nd Quarter
Deputy Barran was selected not only for performing his duties competently and conscientiously, he does it professionally and unselfishly.  It was recently brought to our attention by a citizen that while patrolling throughout his assigned District during the freezing weather we experienced this past winter, Deputy Barran came upon an individual who was sleeping in their vehicle and did not want to move to a shelter. Deputy Barran took it upon himself to use his own money to purchase a battery and a tank of gas for the individual so they could stay warm during this cold spell.  He then passed by throughout the night checking to make sure they were safe.  This is just one of the examples of his kindness and generosity that if it were not for a citizen calling to thank him, we would not have known the full extent of his generosity. 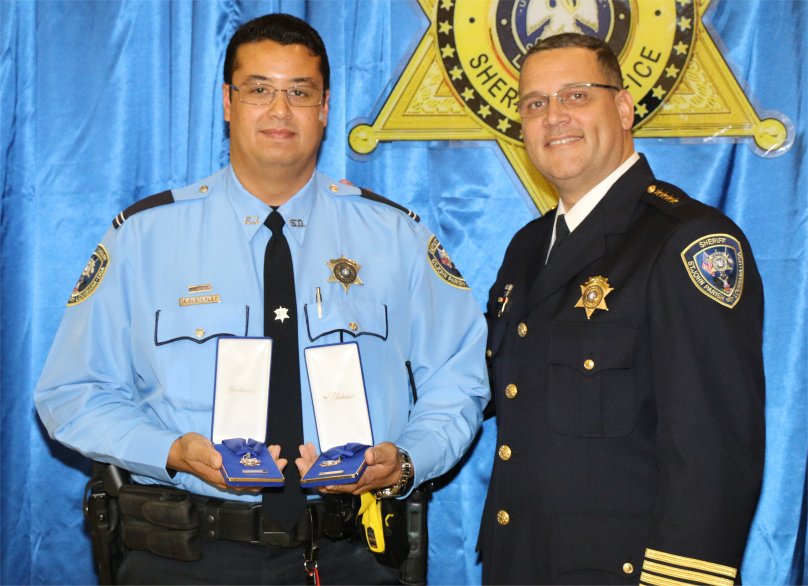 Deputy Michael Duronslet received the Officer of the 3rd Quarter
On August 25, 2014 Michael Duronslet successfully performed CPR on two different individuals in their time of need. These two events occurred within one hour of each other. He assisted in getting the hearts restarted on both patients before they were transported to the hospital for additional treatments. 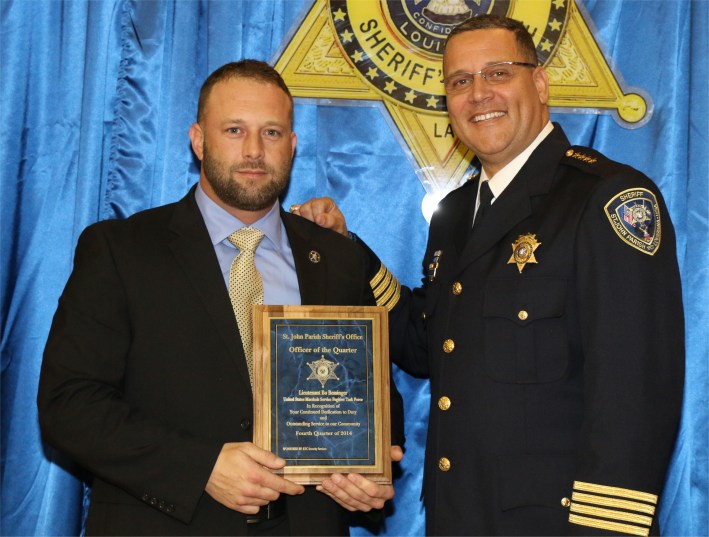 Lt. James “Bo” Bessinger received the Officer of the 4th Quarter
As a member of the US Marshals Fugitive Task Force, Lieutenant Bessinger is tasked with searching for and apprehending the most violent of criminals, often called to report to duty in the very early hours of the morning not knowing when he will return home or if the search will take the team across state lines.  Since joining the task force 18 months ago, Lieutenant Bessinger has a 100% arrest rate of all cases assigned to him from St. John Parish Sheriff’s Office.

Lt. James “Bo” Bessinger was then honored with the 2014 Officer of the Year Award, presented to him by Sheriff Mike Tregre, and T. J. Qutob, Owner of Petra’s Restaurant, Sponsor of the Officer of the Year award.  Keynote Speaker was Mr. Anthony Bynum, Special Agent in Charge, New Orleans office of the US Secret Service