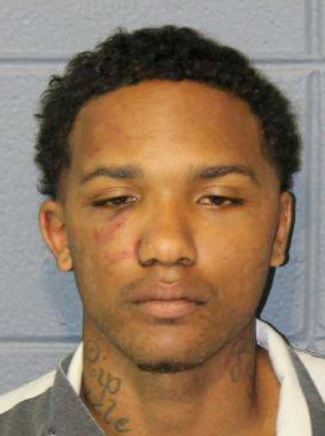 Ryan Stewart, 23, of Reserve was arrested Tuesday, February 21, 2017 in connection with attempted burglaries of Guidry’s Goodies on West Airline Highway in Reserve. On Monday, February 20, 2017, at 9:25 p.m., deputies responded to the business in reference to an unknown black male attempting to burglarize the business. As deputies were responding to the area, the owner gave chase on Ellen Street in Reserve and detained the subject until deputies arrived. Upon reviewing recorded video surveillance from the business and over the course of the investigation, investigators identified the perpetrator as Stewart. Also, on February 20, 2017 at about 11:45 a.m., deputies responded to the same business in reference to the business being burglarized. Upon arrival, the victim told deputies that on February 19-20, 2017, several alarm activations were recorded. Upon reviewing recorded video surveillance during the course of this investigation, officers identified Stewart as the perpetrator who climbed through a window on February 20, 2017 about 11:30 a.m. to enter the business, search the register, and exit from a side door. The owner told deputies, at the time, nothing appeared to be taken.

Stewart was booked with attempted simple burglary of a business and flight from an officer. He is being held in custody in lieu of a $6,000 bond. Stewart was arrested five times in St. John the Baptist Parish since February 2015. He was arrested in September 2016 for simple burglary of the same business as well as illegal possession of stole things. Other previous charges included but not limited to are for simple battery in February 2015; illegal possession of stolen things in March 2015; and 3 counts of simple burglary and simple escape in December 2015.