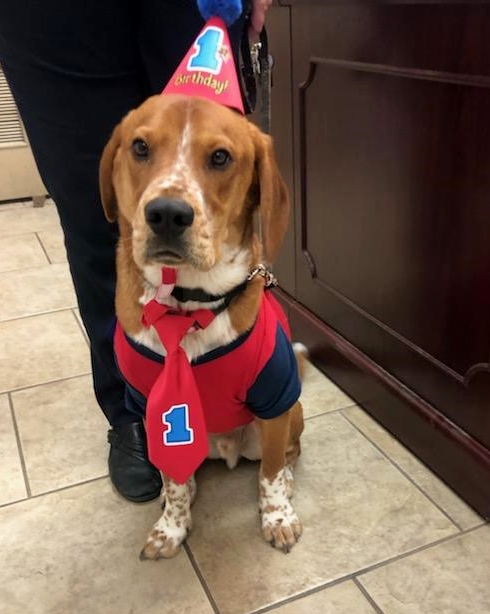 On February 6, 2020, the St. John Parish Sheriff’s Office wished happy birthday to a very special officer. Finn, the SJSO’s first trauma K9, turned 1.
Finn joined the ranks of the SJSO in May 2019 when he was commissioned a trauma K9 officer. Finn serves in a variety of situations including helping in crimes against children, domestic abuse incidents, deadly accidents, and other traumatic events as well as bringing comfort to first responders who often deal with stress and anxiety in their lives.
“Since joining the sheriff’s office, Finn has brought so much joy to so many,” said his handler, Det. Sgt. Ann Taylor said. “Finn has met with hundreds of children and adults in different environments and assisted them in feeling comfortable with speaking with the police.”
As a pup, while in training to become a comfort dog for victims and his co-workers, Finn has attended court on several occasions and learned courtroom etiquette as he has sat patiently through court proceedings that lasted from 30 minutes to five hours.
He has accompanied Detective Sgt. Taylor to many forensic interviews at different locations in the New Orleans area. Finn has visited many physicians’ offices and patiently sat with no nervousness while medical devices such as blood pressure equipment and sonograms were being used. He also has attended special events on behalf of the sheriff’s office and sat without any disruption to events.
Finn is still in training since training a dog in trauma response takes at least two years. As Finn continues to work hard to do his job, Finn spends his days at the SJSO Criminal Investigations Division, dressed in his bow tie or T-shirt, ready for work, and thoroughly enjoys visiting his co-workers and offering his affection with hugs.
Among the commands he has learned and uses daily are sit, stay, down, high five, wait, fetch, get in your seat, quiet and work.
“While these commands may not seem like a lot, as we celebrate Finn’s 1st birthday, we understand that being exposed to different elements every day can sometimes be a little stressful, so we also take moments, when possible, to allow him to just be a pup,” Det. Sgt. Taylor said.
“Finn loves the treats and affection that he receives from all his friends and visiting his co-workers daily,” she said. “His personality is somewhat timid at first, but once he is comfortable with a person, he becomes a comical character and tends to bring smiles and joy to everyone he meets, even some that are skittish with dogs.”
At home with Det. Sgt. Taylor, Finn really becomes goofy, and mostly enjoys playing with his furry brothers and loves sleeping in a king size bed