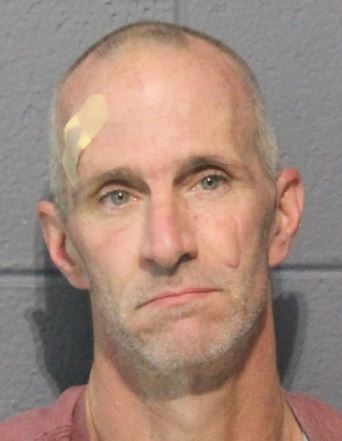 Joseph Ray Hollingsworth, 44, of Independence faces several charges after dragging a police officer with his vehicle in connection to a shoplifting incident at Walmart in LaPlace.

On February 15, 2020, officers working security detail were notified of a man, later identified as Hollingsworth, stealing items in the store. Store personnel reported that in another incident the suspect had previously stolen items valued at about $1,500 from the store. Officers located the suspect and detained him in an office of the store. The suspect did not have identification and gave a false name to officers.
Shortly after being detained, Hollingsworth fled from the office and exited the store. As officers pursued Hollingsworth, who had manipulated the handcuffs to be in front of his body, he refused verbal commands to stop. Officers made contact with Hollingsworth as he was entering a vehicle. As an officer dove on top of Hollingsworth to stop him from fleeing, Hollingsworth started the vehicle and drove off, dragging the officer across the parking lot before crashing into a basket corral. The officer was able to place the vehicle in park then apprehend the suspect.

Officers then conducted a probable cause search of the vehicle and discovered a wallet with the identification of the suspect in custody, Hollingsworth. Officers also located a handgun reported stolen and a column key chain with plastic bags with residue of methamphetamine. Officers also learned Hollingsworth had active warrants for larceny issued by Walker Police Department and a suspended driver’s license.