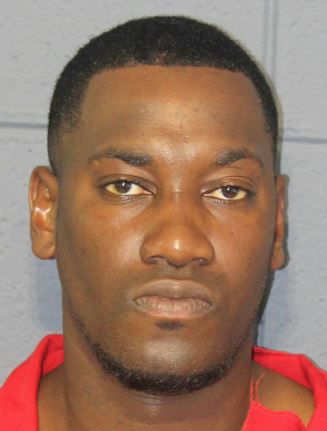 Corrie Wallace, 37, of LaPlace has been charged with first degree murder in connection to the shooting death of Ja’Riel Sam, 25, of LaPlace.
On April 4, 2020, the initial call regarding a vehicle involved in a hit and run in the 400 block of Belle Terre Boulevard in LaPlace, came in about 3:30 a.m. Upon arrival, officers located a vehicle crashed into a guardrail and a nude female, later identified as Ja’Riel Sam, unresponsive, with a gunshot wound to the head, in a nearby vacant lot. She was pronounced deceased at the scene by the coroner’s office.
Through investigation and review of SJSO crime video surveillance and video footage from neighboring businesses, officers developed Wallace as the suspect. Based on further investigation, detectives determined a hit and run did not occur. Officers discovered that Wallace crashed the vehicle after Ja’Riel Sam escaped from the trunk of the vehicle and ran into the vacant lot. Wallace exited the vehicle, chased the woman then shot her. He then fled the scene on foot.
During the course of the investigation, detectives uncovered information that before the shooting Wallace was inside Ja’Riel Sam’s apartment where an assault occurred. Wallace then forced the victim from the apartment, put her in the trunk of her vehicle and drove towards Belle Terre Boulevard. Ja’Riel Sam’s 4-year-old son also was inside the apartment. He was unharmed.
It is unknown at this time if Wallace and the victim knew each other.
Based on investigation, detectives obtained a warrant for Wallace’s arrest about 3 p.m. yesterday.
“I commend my officers for their excellent and thorough work,” Sheriff Mike Tregre said. “From when I received the first call yesterday morning from 911 to when the divers entered the drainage canal on Belle Terre Boulevard to recover what we believe is the murder weapon to obtaining an arrest warrant, our team worked diligently on this case that involved three different locations of crime scenes. This case started about 3:30 a.m. Sunday morning and by 3 p.m. a solid case had been built.”
Wallace turned himself over to authorities this morning and confessed to the crime.
This investigation is ongoing. Anyone with information on this crime is asked to call the St. John Parish Sheriff’s Office TIPS line at 985-359-TIPS, SJSO dispatch at 985-652-6338, or the Criminal Investigations Division at 504-359-8769. Citizens can also submit tips on the Sheriff’s Office website at https://stjohnsheriff.org/submitatip.php