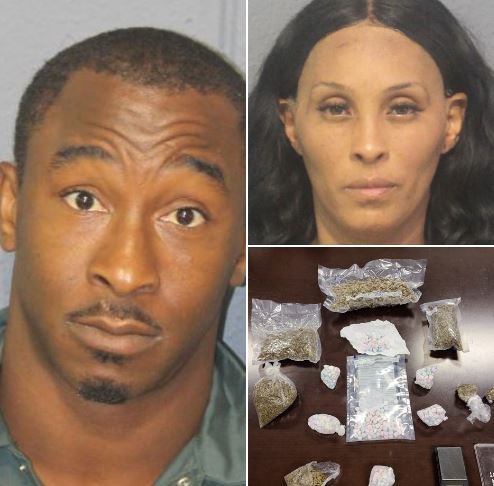 A Reserve man and LaPlace woman were arrested August 28, 2020  after officers discovered more than 600 doses of Ecstasy and half pound of marijuana during an illegal drugs investigation. Arrested were B.J. Brown , 30, of Reserve and Cassandra Jones, 46, of LaPlace.

On August 28, 2020, about 11 a.m., members of the St. John Sheriff’s Office Special Operations Division observed a black Nissan SUV traveling northbound on East 22nd Street in Reserve. Through an ongoing investigation, detectives were aware the passenger of the vehicle was B.J. Brown who was wanted on outstanding warrants for drug violations.

A brief pursuit began when the driver, later identified as Jones, refused to stop the vehicle. Jones headed eastbound into LaPlace. During the pursuit, Jones attempted to evade officers by turning in East St. John High School. Detectives were able to safely and successfully corner the vehicle and apprehend Jones and Brown. The school was notified during the incident but was not placed on lock down due to the swift apprehension.

Due to Brown’s known involvement in distributing illegal narcotics, a search warrant was obtained for the vehicle. Inside the vehicle, detectives located more than 600 doses of MDMA also known as Ecstasy, over 200 grams of marijuana and a digital scale.