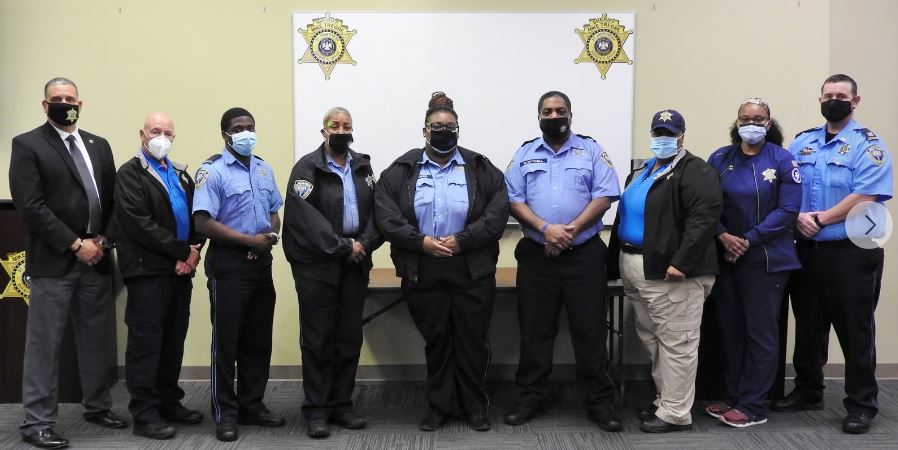 The St. John Parish Sheriff’s Office recently held its ninth class for Peace Officer Standards and Training for Correctional officers. Officers from the SJSO who participated in the 110-hour POST Corrections training graduated November 10, 2020 during a ceremony at Patrol Headquarters in LaPlace.
Graduates are Gregory Mitchell, Barbara Weber, Erikka Chukes and Jessie Wells, of the St. John Sheriff’s Office; and Savannah Mansur, Andrew Adams , Alex Williams and Antony Shields of the Tangipahoa Sheriff’s Office.
Sheriff Mike Tregre congratulated the officers on their successful completion of this difficult course. “It takes a special person to work in a jail,” Sheriff Tregre said, “Working in a jail, you learn a lot of lessons … especially about patience and tolerance … and how to be assertive and tactful. …. You learn about interacting with people. All of this can help you go a long way in your career and in your life. ”
Captain Geo Giovingo, the lead instructor, told the graduates to continue to work hard, be safe and stay humble. “ This is a stepping stone to begin your careers,” he told students. “I urge all of you to stay humble with the eagerness to learn throughout your careers.”
Warden Gordon Jeffcoat and Deputy Bryce McClendon also commended the officers for completing this training.Captain Giovingo said he grateful to the outstanding teachers who worked with students.“I want to thank all of the instructors who assisted,” he said. “It takes teamwork to make any training successful. The students couldn’t stop talking about the training they received and left all positive reviews on the course evaluations.”
While officers may work in Corrections without being a peace officer, the Corrections certification bestows a higher level of authority to carry out job duties.Students had 110 of coursework including legal aspects, report writing, use of force , CPR/Stop the Bleed , chemical agent, defensive tactics, baton, shotgun, taser, and basic jail guidelines.Officer liability, inmate rights, transporting and escorting inmates, functions of a jail, principles of jail security, suicide prevention, and booking, classification, and release procedures were among the topics discussed.
Other instructors were Captains Blane Rome Jr. and Charles Wale and Lt. Jason Raborn, firearms and taser; Deputy Darren DeSalvo and Deputy Bryce McClendon, defense tactics; Lt. Raborn, chemical agent; and Lt. Denise Bertrand, CPR/first aid and stop the bleed.