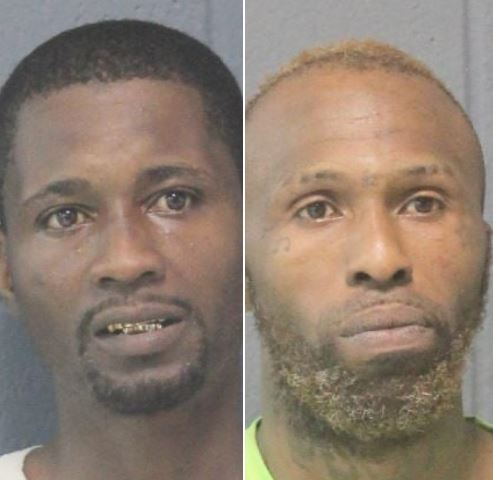 Two men have been arrested in connection to an early morning robbery on Monday, February 22, 2021 at Moni Carlo in Garyville. Anthony Joseph Brown, 35, of Reserve, and Andre L. Butler, 39, of Edgard face charges related to the robbery.
About 3 a.m., February 22, 2021, deputies responded to Moni Carlo in reference to a male subject being robbed while playing a gaming machine. Upon arrival, officers learned a male, later identified as Butler, hit the victim in the neck while another male, later identified as Brown, stole the victim’s winning ticket valued at $40.
Subsequently, deputies observed two males, who matched the description of the suspects, still on the premises and detained them. Brown initially gave deputies a false name but was later identified and found to have several active warrants for his arrest. Brown also was charged with simple robbery (felony) and resisting an officer by refusing identity (misd). Since 2005, Brown has been arrested 28 times in St. John the Baptist Parish.
Officers learned Butler had an active warrant for his arrest. He also was charged with simple robbery and simple battery. Since 2000, Butler has been arrested 49 times in St. John the Baptist Parish.
Brown and Butler were transferred Feb. 22 to LaSalle Correctional Center.