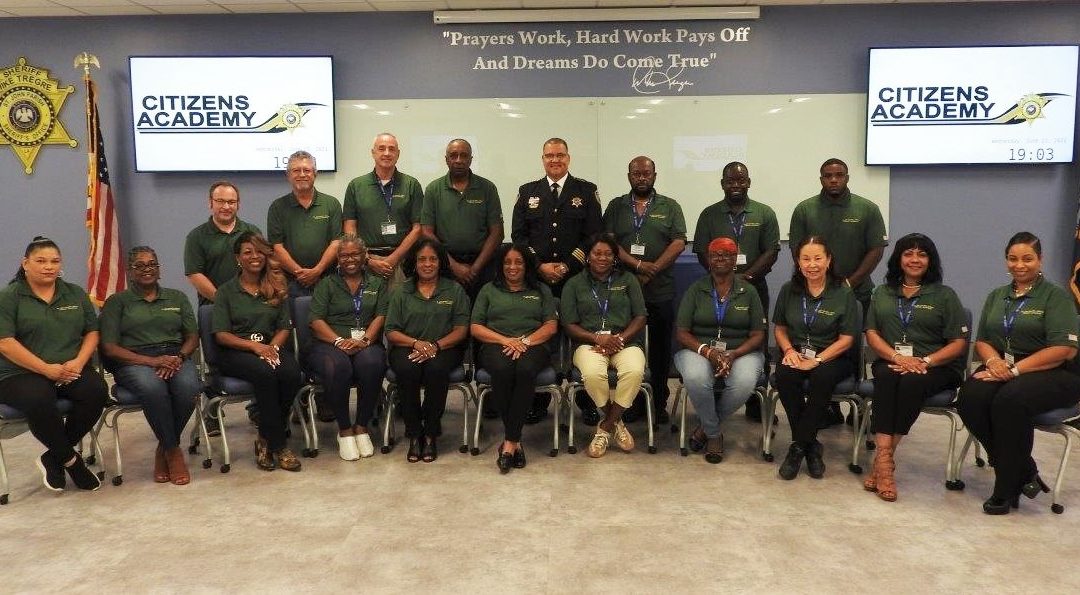 The St. John Parish Sheriff’s Office concluded its fourth Citizens Academy with a graduation ceremony for participants June 23, 2021 at the Lloyd B. Johnson Law Enforcement Training Center in LaPlace.
Sheriff Mike Tregre said he was very pleased with the academy and grateful to commanders and other officers who worked hard to put together outstanding presentations for the participants. He offered special thanks to Officer Bernell Charles who organized the program and served as the host and facilitator.
Sheriff Tregre also thanked the citizens for attending the program, congratulated each participant as they received their graduation certificate, and gave them one final assignment before they were dismissed.
“When you’re out and about in the community, share this new knowledge with your family and friends,” he told the CA graduates. “Members of the St. John Sheriff Office try to inform citizens about the importance of a partnership between law enforcement and the community, but it is that much more meaningful when a citizen hears it from another citizen.”
Sheriff Tregre believes that citizens who are informed about the SJSO can help enhance public safety, make informed decisions about how to protect themselves, better understand law enforcement strategies to problem solving, and better understand the importance of building relationships between law enforcement and citizens.
During the nine-week program, 22 participants had the opportunity to get an informative and interactive look behind the scenes of the sheriff’s office. Through lectures and demonstrations, they learned about the real world of law enforcement and how officers carry out their mission “To Protect and Serve” on a daily basis.
Representatives of the department’s various divisions spoke about their responsibilities and duties. Participants learned about 911 calls, community and public relations, the patrol division, K9 unit, the reserve division, the criminal investigations division, the narcotics/special operations division, the crisis management unit, fleet management, training, information technology, internal affairs, polygraphs, corrections, crime scene investigations, human resources and administrative services. Fire services and railroad safety also were addressed.

Demonstrations such as observing canines as they locate explosions and marijuana, defensive tactics, tasing and exploding entryways were among the highlights of sessions.

At their last session before graduation, the group also had the opportunity to learn about robotics in law enforcement and participate in a use-of-force simulation and discuss use-of-force issues with officers.

Jada Flowers, who participated in the academy, said each session was informative and educational.

“Citizens Academy is an insightful, informative, transparent opportunity allowing participants a firsthand look into the internal operations, policies and procedures of the department,” Flowers said. “It’s difficult to choose one particular, absolute favorite takeaway; as each presentation was well organized and professionally displayed. The leaders and presenters were passionate and knowledgeable. “

“The extensive training plans and technological advances give me confidence that our Sheriff’s Office is equipped to protect and serve with skill and integrity,” she said. “I am grateful for the opportunity to participate in this year’s Citizens Academy.”
Richard Abbondante, another CA participant, said he has a greater appreciation of the SJSO after attending the academy.
“I didn’t know all that the sheriff’s office did for the parish … from the many facets involved from the patrol officer to crime scene investigation to tracking down offenders to collection of taxes to search and rescue and SWAT,” Abbondate said.
“I also recognize the many issues today in finding qualified candidates to wear the badge is only getting harder,” he said. “I was very impressed with the amount spent on training these brave men and women who work to protect our community. I truly believe the better you train someone for their job, the better they will perform it. It is very evident that Sheriff Tregre is working hard to be a leader in what is necessary to have a trained police force to safeguard the businesses and residents of St. John Parish.”