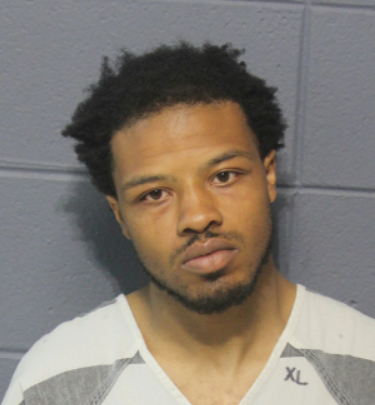 Keenon Alexander, 23, of LaPlace was arrested Tuesday, April 26, 2022 after leading officers on a brief foot pursuit during an attempted vehicle burglary investigation.

On Tuesday, April 26, 2022, about 1 a.m., deputies were on pro-active patrol on Ridgewood Drive in LaPlace where they received a report in reference to two male subjects attempting to enter a vehicle in the 1900 block of Ridgewood. Upon arrival, officers learned the vehicle was locked, and the subjects fled the area on foot.

On Longwood Drive, officers observed a male subject fitting the description of one of the male suspects attempting to enter the vehicle on Ridgewood. After a brief foot pursuit, officers detained the suspect, identified as Alexander. Alexander, a convicted felon, was in possession of a firearm. Alexander also was involved in a standoff with officers that ended peacefully in July 2020 when he was armed with two guns and barricaded himself inside his Oak Point Drive home.

Alexander was booked with possession of firearm/carrying concealed weapon by convicted felon (felony) and resisting an officer by flight (misd). He was released April 26, 2022.

Officers were unable to locate the second suspect in this incident.

Anyone with information about the second suspect or this incident is asked to call the St. John the Baptist Parish Sheriff’s Office TIPS line at 985-359-TIPS or the Criminal Investigations Division at 985-359-8769. Citizens can also submit tips on the Sheriff’s Office website, http://stjohnsheriff.org/submitatip.php.