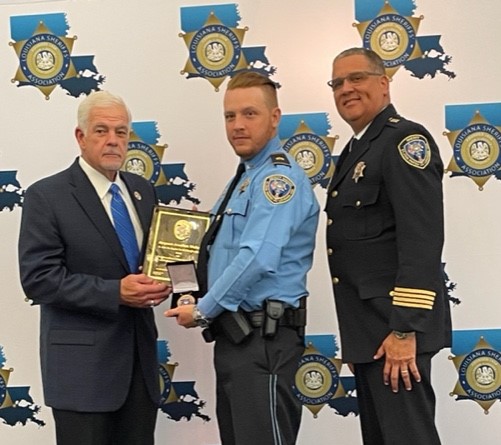 Sgt. Walker received this prestigious award for his heroic actions, exhibiting a life-threatening act of bravery in the late hours of July 31, 2021 when he responded to an active shooter incident.

On July 31, 2021, while off duty, Sgt. Walker responded to an active shooter incident on Interstate 10 in St. John the Baptist Parish. With his family, in the safety of his vehicle, nearly ½ mile from the scene, Sgt. Walker decided to leave his family and advanced on foot, without a radio or body armor, to assist with the active shooter incident. A man had shot two people during a dispute during a multi-vehicle traffic accident on the I-10.

A traffic jam occurred after the accident on I-10. The man, who was headed to Alexandria with his wife who he had just married during a ceremony in Kenner, and her friend, were in the traffic jam. During the wait, the man and his wife got into an argument, and the man reached for his gun. The friend then escaped the car on foot.

The man exited the vehicle and shot the male friend in the leg and also shot into a nearby vehicle, injuring the hand of another driver. The man’s wife then jumped out of the car and fled to first responders who were helping victims of the collision. The EMTs helped the wife enter the ambulance.

Shortly after, Sgt. Walker located the suspect who was shaking and beating on the ambulance, tryitrying to get to the woman. Sgt. Walker pursued the shooter, and after a brief struggle, arrested him.

The victims were airlifted from the scene and taken to a New Orleans hospital where they were treated for their injuries and released.