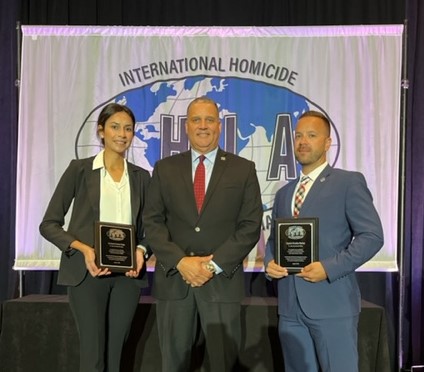 Captain Brandon Barlow and Lieutenant Carolina Pineda of the St. John Parish Sheriff’s Office were honored with the Award of Excellence at the International Homicide Investigations Association’s training conference August 11, 2022 in New Orleans. With Cpt. Barlow and Lt. Pineda is Sheriff Mike Tregre.

The Award of Excellence is presented by the IHIA for displaying exceptional innovation and perseverance in conducting homicide investigations, evidence collection, evidence examination, and successful homicide case prosecution.

In February 2017, Captain Barlow and Lieutenant Pineda were assigned to investigate the homicide of Andrew Jasmin. Through the course of nearly a year, Lieutenant Pineda and Captain Barlow utilized phone records, surveillance video, interviewing skills, and the assistance of the Harris County Sheriff’s Office to make four separate arrests in the homicide. In 2022 Ahkemon Bardell Jr. was found guilty and sentenced to life in prison without parole for the murder of Jasmin. The three other subjects arrested in connection for the homicide were also sentenced accordingly.